Currently, I’m writing like a mad woman, trying to wrap up an epic climax sequence for Mailboat V. Guys, I think even *I* underestimated how epic it’s gonna be.

So, earlier this week, I enlisted the aid of my friends Sergeant Jason Hall and Lieutenant Ed Gritzner of the real-life Lake Geneva Police Department to draw from their expertise.

To be honest, I used to feel guilty about asking them to take time away from their real-life duties just to make-believe with me.

And then came the day Ed and I were working through the climax sequence for Mailboat III: The Captain’s Tale.

“One last question,” I said. “Where would you set up your command post?”

“The parking lot of the state park,” he said.

I thanked him for his time, and we hung up.

Two minutes later, he called me back. “I change my mind. The parking lot at the state park is too close to the action. Let’s put it at the middle school.”

I laughed, even as I updated my notes. The way he called me back so fast–he was acting like this was real.

And then I realized… he was basically treating my climax sequence like a training scenario.

Scenario training is something emergency personnel do in real life—and they make it as authentic as possible. The below photo isn’t a real car accident; it’s a training scenario I attended in 2016, put on at an event called the Writers Police Academy. 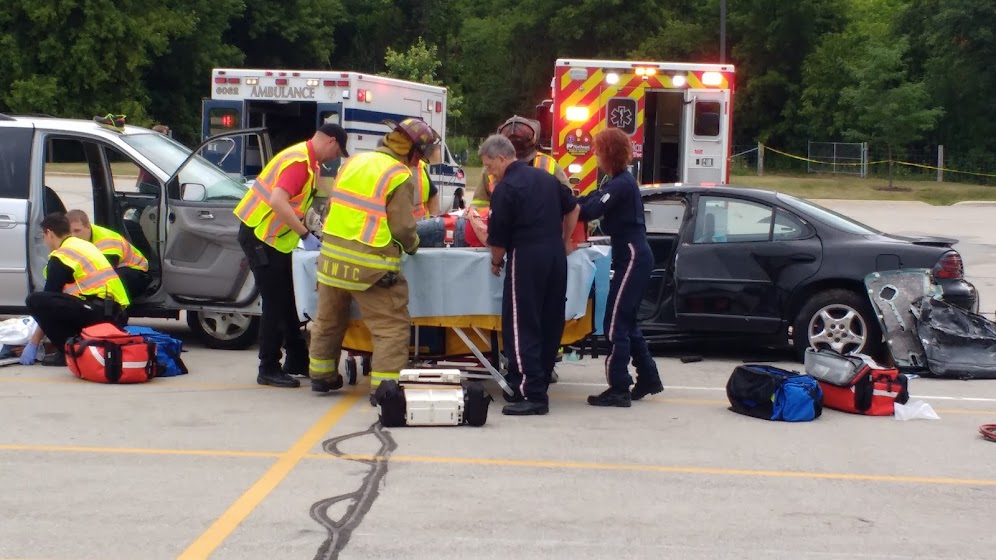 They pulled out all the stops for this, even landing a helicopter to carry away one of the “patients.” The entire thing unfolded as if it were real, and gave the emergency personnel involved a chance to practice their skills and use their equipment. That way, next time it is real, they’re ready. 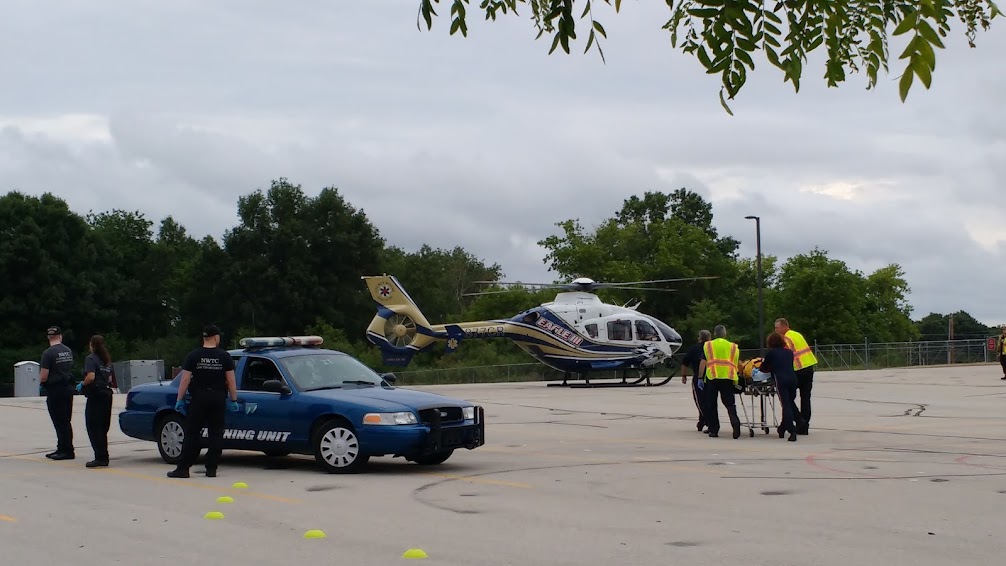 Now that I equate my fictional emergencies with scenario training, I don’t feel so guilty about asking Jason and Ed for their time. And frankly, they’re usually delighted to help. (I keep having to remind myself that other people find authors cool.)

And after all the emergencies I’ve written into the Mailboat Suspense Series… you should feel very safe in Lake Geneva. I’ve prepped your PD for the literal worst, LOL.

But for the climax sequence of Book V… I might have thrown them a doozey.

When working through these “scenarios,” I’ll start by telling Ed and Jason what information they have at their disposal, and they’ll in turn tell me how they’d respond, what tactics and resources they’d deploy, etc.

Let me just say, the climax of Book V has a lot of moving parts–what my cop friends would call “a dynamic situation.” From an author’s perspective, I’m rotating between quite a few points of view, as well as multiple, constantly-changing locales; and in real time, everything would be unfolding in a matter of minutes. This scenario is pulling in more law enforcement officers than I even have names and call signs for. (Random name generators have been my friend. Don’t worry, I only use the good ones, and I lean towards German surnames, cuz southeast Wisconsin, amiright?)

How big is the climax sequence for Mailboat V? I think Jason’s reaction sums it up best:

I gave him the opening scenario. In response, he established a perimeter and sent in additional units.

I threw him a hard left.

“Oh, shit,” he said. “I lose my job.” Despite his initial pessimism, he adjusted quickly, creating an inner perimeter and calling in additional resources.

I gave him another hard left.

“Oh, God.” He considered a moment, then asked—hopeful, almost begging— “Is my outer perimeter in place yet?”

I didn’t have the heart to tell him… probably not.

LOL. I have too much fun with these books.

Also, don’t get any ideas about calling the LGPD so you can grill Sergeant Hall or Lieutenant Gritzner for spoilers. I haven’t even told them everything–like, the final, final showdown, which I felt confident to write without their input. In fact, I didn’t even tell them which characters were involved.

“I’m trying to think who’s who in this scenario,” Ed admitted.

Secretly? I’m really hoping to blow their minds once they read it.

So… Definitely tired over here from all the last-minute writing. Definitely feeling like my arm’s about to fall off. Definitely wish the writing was done already. And definitely watching the calendar and observing that this release is going to be down-to-the-wire.

But that’s pretty typical, TBH. I have no idea how I manage to release a book every year. Magic is real.

But now that the climax sequence is finally coming together… I’m more certain than ever that this could be my favorite book so far. If you haven’t reserved your pre-order yet, better get it in now! Or come meet me at one of the book signings on the 2022 Lake Geneva Book Tour. When you see me, you’ll know I put 110% into this release.

P.S., if you want to help me over the finish line in a very real way… you can buy me a coffee! I can’t tell you how much that lifts my spirits, warms my heart, and fuels my writing.

2 Replies to “Writing the Climax of Mailboat V… with the Lake Geneva PD!”