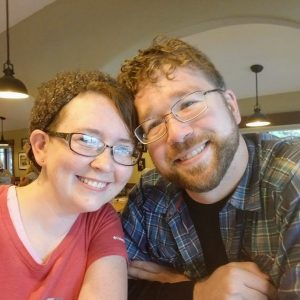 I recently let you all know that Charles and I made the semifinalist round of the ScreenCraft Virtual Pitch Competition, where we proposed the idea of the Mailboat Suspense Series as a TV show.

With that accomplishment, our next task was to submit a recorded pitch to try to get to the finalist round. (You can watch Charles and me here!)

Sadly, Charles and I and the Mailboat story weren’t chosen as finalists, so this ends our journey with the Spring 2022 ScreenCraft Virtual Pitch Competition.

But that’s hardly the end of our journey with Hollywood. We still have such big plans!

For starters, placing as semifinalists is still a big deal. We beat out almost 1,000 other pitches to get there. This credential can only help us on our forward journey.

And let’s not forget, I’ve been approached on two separate occasions by parties interested in my film and TV rights. I’m still nursing those leads along.

The competition is really only a small part of a much larger picture.

I couldn’t imagine this journey without you, my loyal fans. Thanks for putting the wind in our sails, cheering us on and believing in an eventual film or TV adaptation. We promise to keep you posted on upcoming developments!

Meanwhile, what can you do to help?

Thanks so much for coming with us on this thrilling cruise. We can’t wait to tell you what happens next! 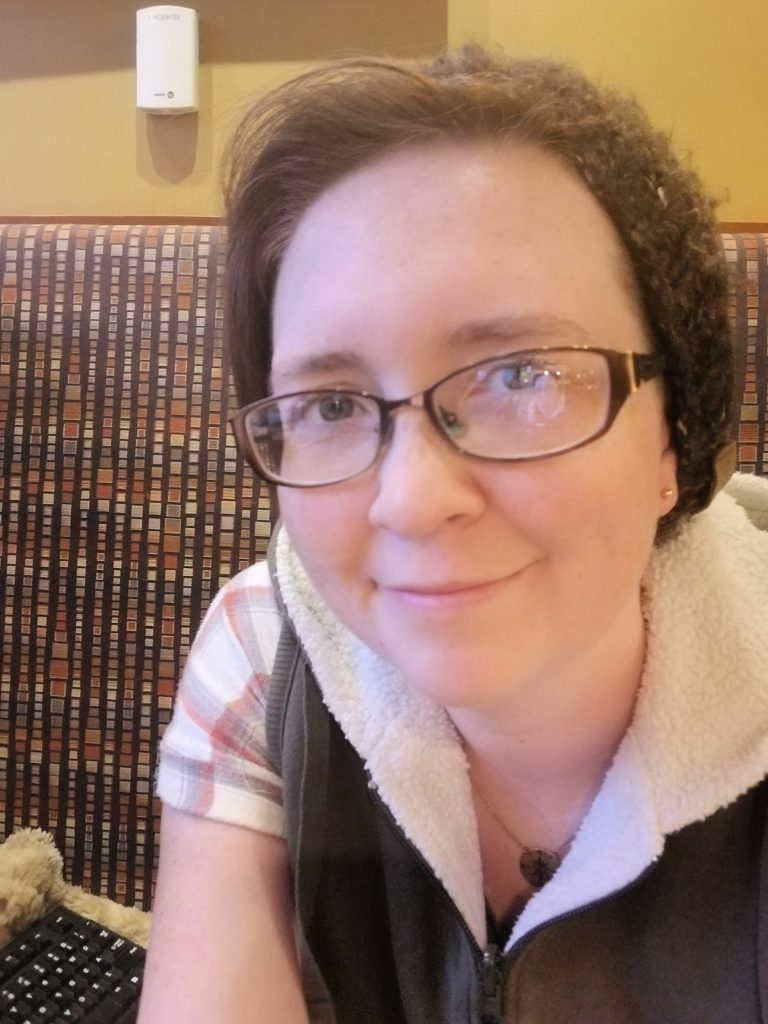 My fans ask it with a squint in their eye. They ask it with a hint of a smile–because they love Bailey–and a hint of concern–they know Bailey’s life in an abusive foster home is a wreck.

To clarify, I was never in foster care. I was never physically abused. I was never sexually abused. But I was mentally and emotionally abused for the first twenty-six years of my life. So while our exact circumstances were different, the ways in which it affected us are the same.

My fans absorb what I say. They nod quietly. Their eyes are full of sympathy. They ask no further questions. It would be impolite. It’s not their place to pry.

And until recently, I was okay with that. My abuser suffered brain damage and is incapable of comprehending the harm she does. I feel no need to blame or harass her for things that aren’t even entirely her fault.

Nor do I feel the need to kick the bee’s nest. As often happens with mental illness, my abuser vehemently denies her illness and takes strong offense to anyone who suggests there may be something “wrong” with her.

But the longer I write, and the larger my platform grows, the more I ask myself what my role is in this world. Do I have a passion? A charity? A cause? I have your ear. (Thank you for that, by the way.) What do I want to speak into it? If I could choose some good to try to do in this world, what would it be?

The words that come back are these:

In short, take care of this thing we call your mental health. I’ve seen what happens when you don’t.

I write about broken people. Bailey believes she’s worthless, invisible, and unlovable. Tommy struggles to talk about matters of the heart and believes he’s too much of a failure to help Bailey. Ryan believes the narrative that he’s shifty, immature, and unreliable–and he doesn’t believe he could break that mold. Monica tries to bury her pain under a fierce exterior and flawless performance.

Yes, it’s a suspense series. But ultimately, it’s not a story about stopping the bad guy and saving the world. It’s the story of how broken people fought bravely to not be broken anymore.

That’s what I write about in my novels. And increasingly, it’s what I want to write and speak about more openly, with the veneer of fiction removed. The stories I tell are real stories. Mine, yours, a lot of people’s. There’s power there. The kind that can save lives and change the world we live in.

Going forward, you might see me writing more about what happened to me and how it led to the stories I write. As I do, I hope to normalize conversations about our mental health. About our hearts and what’s going on inside them.

We’re all broken, somehow or another. That’s just life. With my words, I want to inspire people and help them to be a little less broken.

There’s a comments section down below. How about dropping a note of encouragement, a prayer, or a positive intention–for you, for me, for anyone you know, for the other fans, or the world at large. Let’s spread some joy.

As many of you know, I was in Lake Geneva a few weeks ago. Thanks to everyone who came to see me at the Cornerstone Shop!

But my primary reason for coming to Lake Geneva was to finally see the area in winter. While I’m currently writing Mailboat V (set at the end of summer and releasing this August), I’m already planning Mailboat VI, which is set in the off season.

(And because I know you want to know, my outlines suggest there will be about eight books all together in the Mailboat Suspense Series.)

Seeing Lake Geneva under ice and snow for the first time was AMAZING. I’m so glad I went! So enjoy this photo journal of my trip. 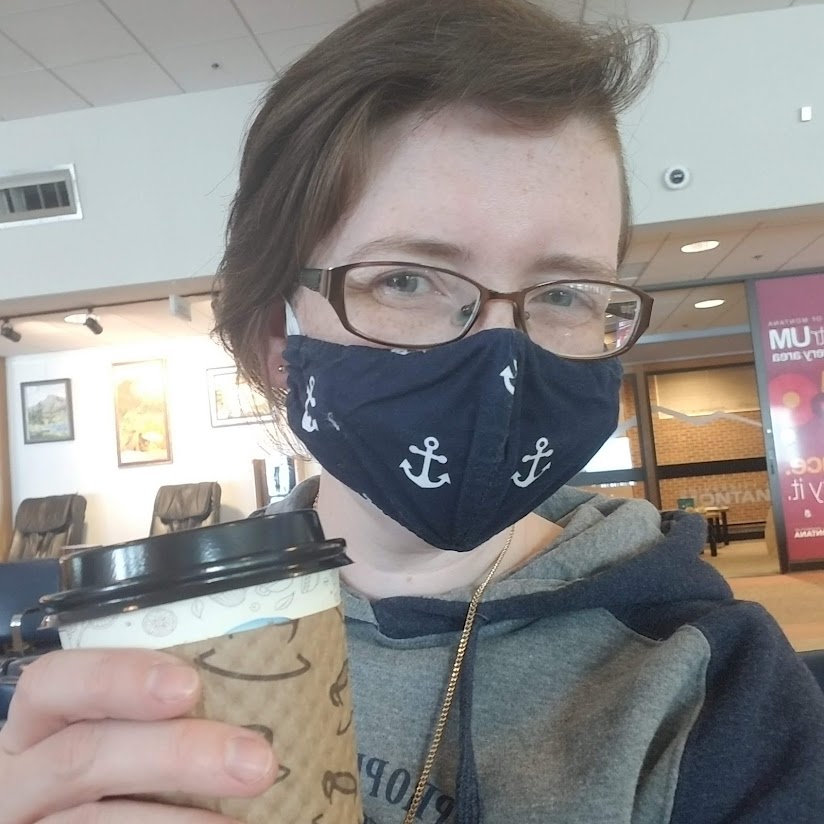 Have coffee, will travel! Even while waiting for my first flight out of Missoula, I was writing the next chapter of Mailboat V for my Patreon Page. (They’ve already read 20 chapters over there!) 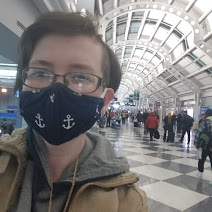 My first time at O’Hare! I only got lost a few times… Also, I arrived really late, and didn’t roll into Lake Geneva itself until one in the morning, LOL. I was tired. 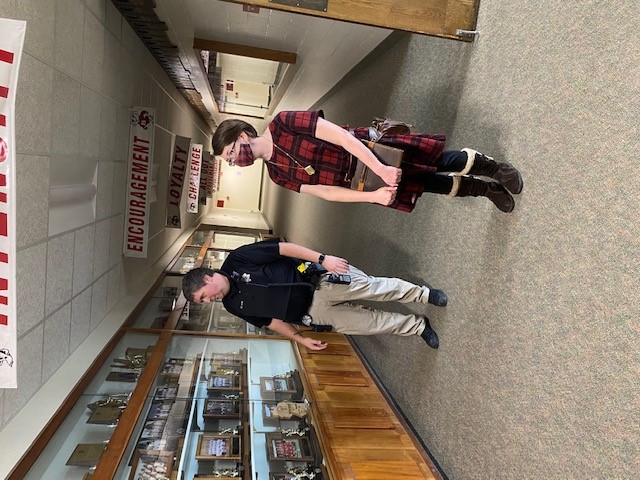 Since Book VI takes place in winter… Bailey will be in school! I reached out to my friends at the Lake Geneva Police Department and asked if their School Resource Officer at Badger High could give me a tour.

Officer Theon Ward was fantastic. Our tour lasted THREE HOURS. Any time he asked if I wanted to see this or that, I replied, “Dude. I live fifteen hundred miles away. YES, I want to see that.”

Thanks, Officer Ward, for making my research so complete! And thanks to Courtney Hinzpeter of the LGPD for coming along and photographing our adventure. 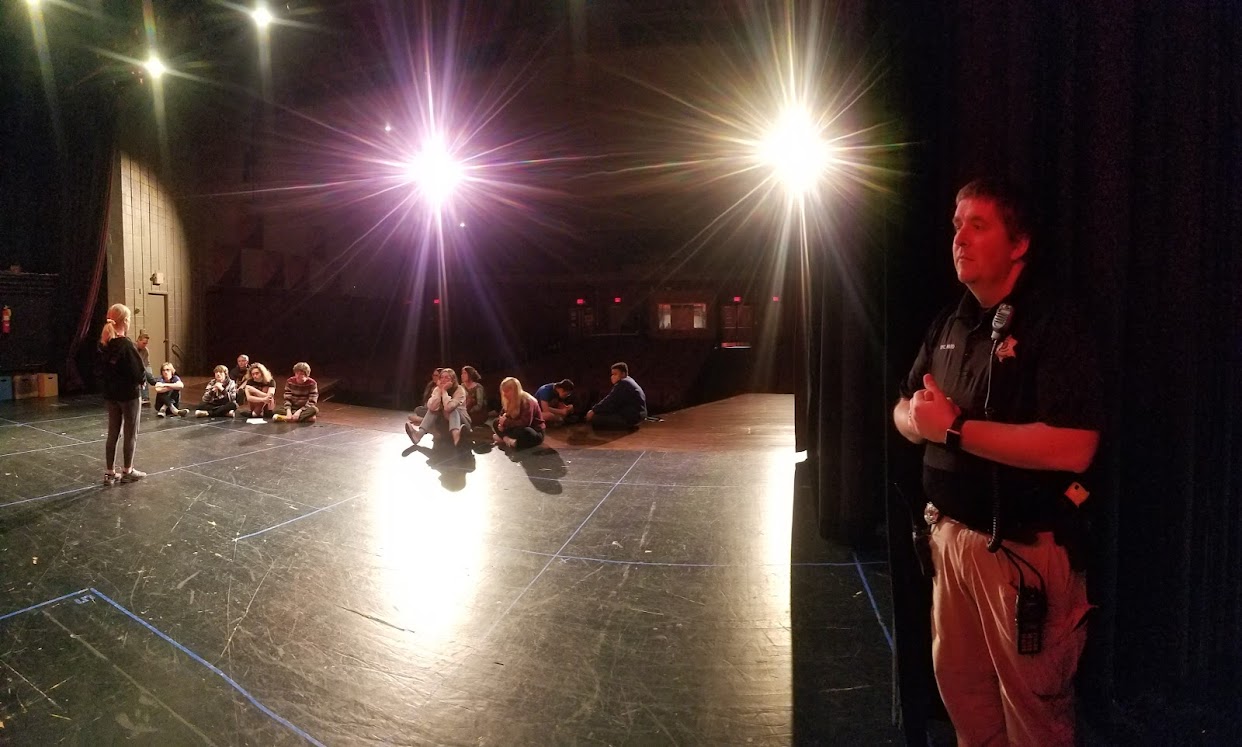 I can’t tell you how impressed I was with Badger High. With all the classes and opportunities offered, it was more like touring a small college than a high school. Here’s my favorite photo of the tour–Officer Ward appreciating an EXTREMELY talented monolog by one of the students from the theater department. 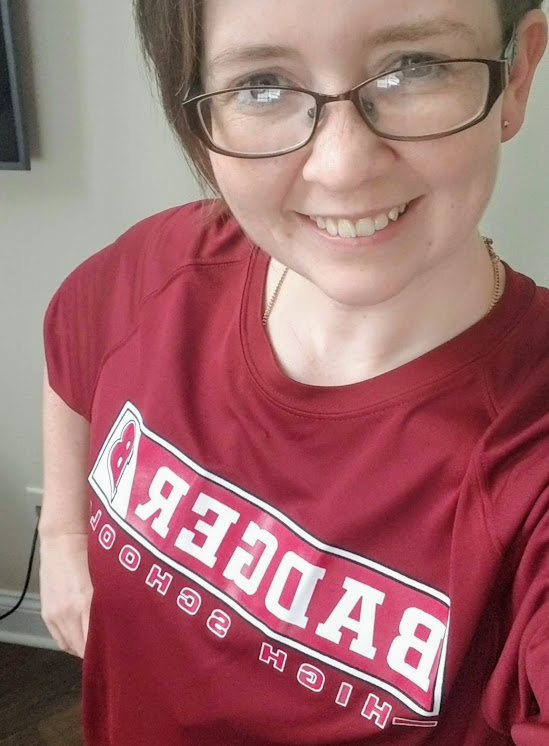 I couldn’t go to Bailey’s high school without picking up a tee shirt! This is now one of my prized possessions. Go, Badgers! 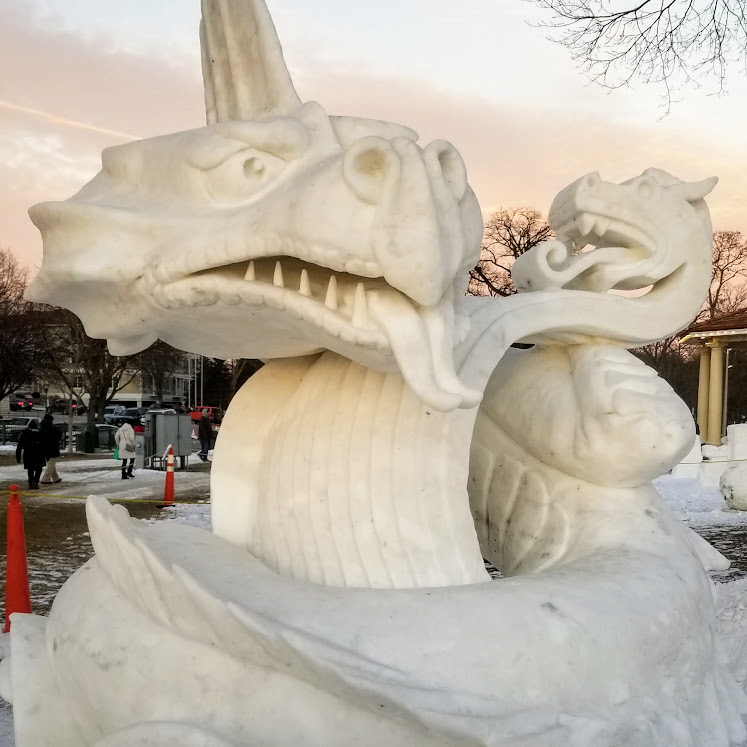 One of the reasons I was so excited for this trip was to see Winterfest and the International Snow Sculpting Competition! My favorite sculpture was, of course, by Team North Dakota–a sea serpent wrapped around a Viking longship. My home state took third! 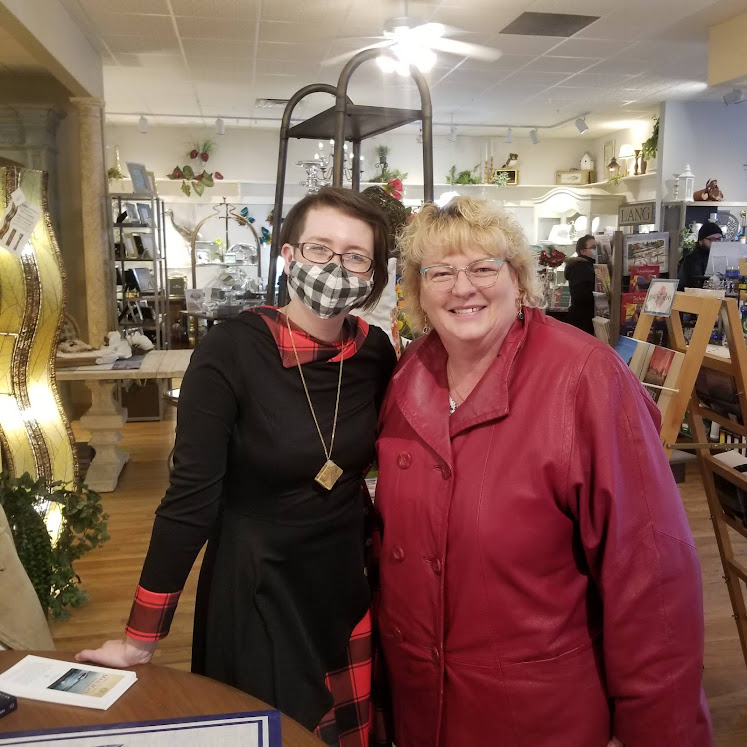 Since I was so busy with research, I made time for only one public event, a book signing at the Cornerstone Shop. Some of you drove two or even three hours to come see me! Thank you so much, I felt the love. Here’s a pic I got with Paula, one of my top fans.

For anyone who was looking for me in Lake Geneva and couldn’t find me… I spent a lot of my down time here! This is the new Mobile Command Unit for the Lake Geneva Police Department. It’s essentially an office on wheels, making it easier for the PD to manage large events like Winterfest, or respond to emergency situations.

And most importantly, IT WAS WARM–one of the top reasons I kept finding myself there, LOL. I got to check out the PD’s latest tech, brush up my skills writing cop stories, and hang out with my friends from the PD–some of whom I hadn’t seen since pre-pandemic. Dang, it was good to see them. 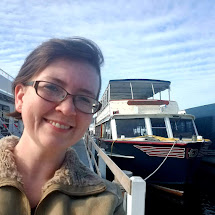 Speaking of old friends… I found the Mailboat up at its winter berth in Williams Bay! We had a good, long talk. So much love for this boat… 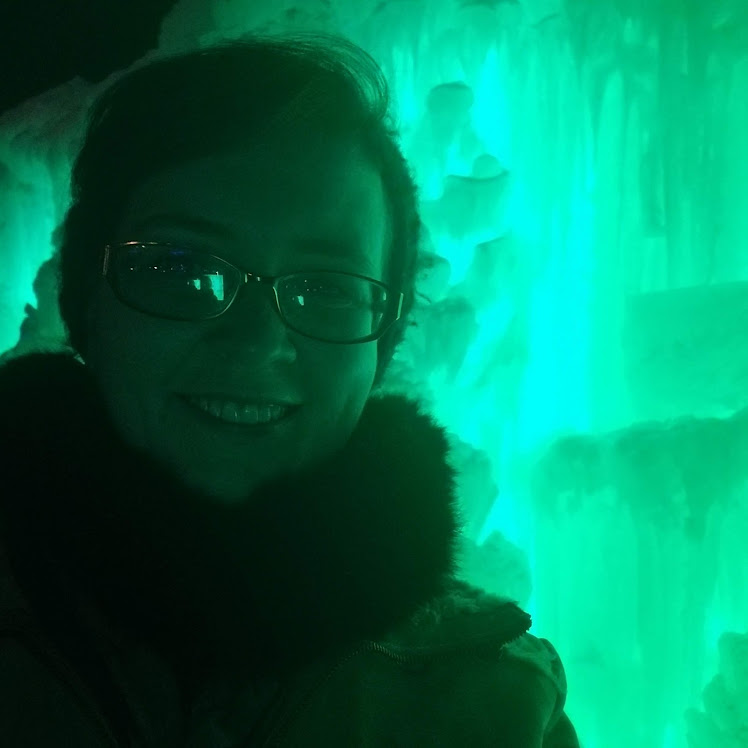 My friend Stacy managed to wrangle a ticket for me to see the Ice Castles, even though they were sold out that weekend! What a magical experience. Yes, I totally tried the ice slides. 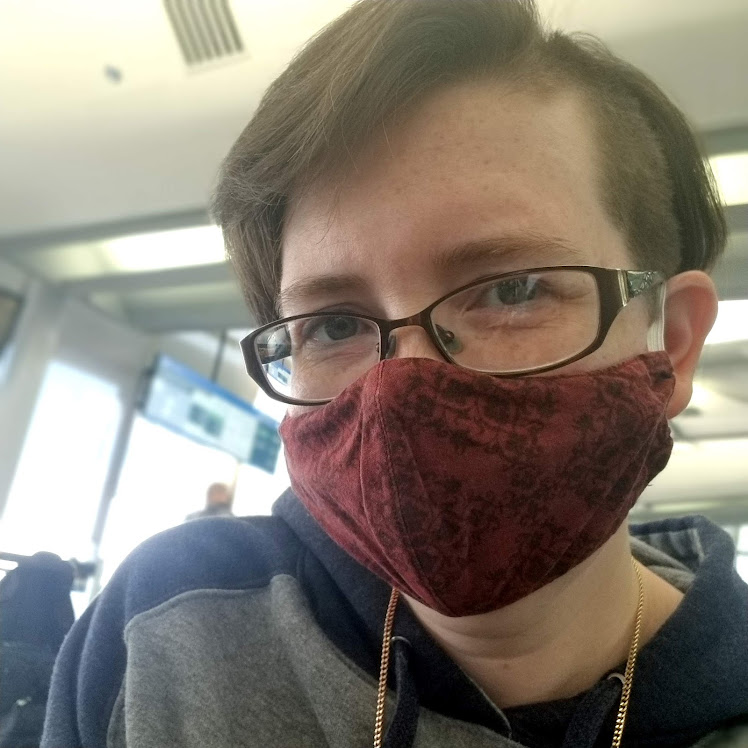 Back at O’Hare, I had time before my flight to upload pictures to my Facebook and Instagram pages–and listen to Bailey go on and on about her life post-series, including memorable trips she took out of O’Hare Airport. My characters always feel so real–and LOUD!–when I’m in the places where the story is set.

And it hasn’t really worn off. Feeling inspired by Bailey’s excitement for her life post-series, I spent time this week fleshing out the big-picture series outline. You know it’s good when you make yourself cry. So much joy. 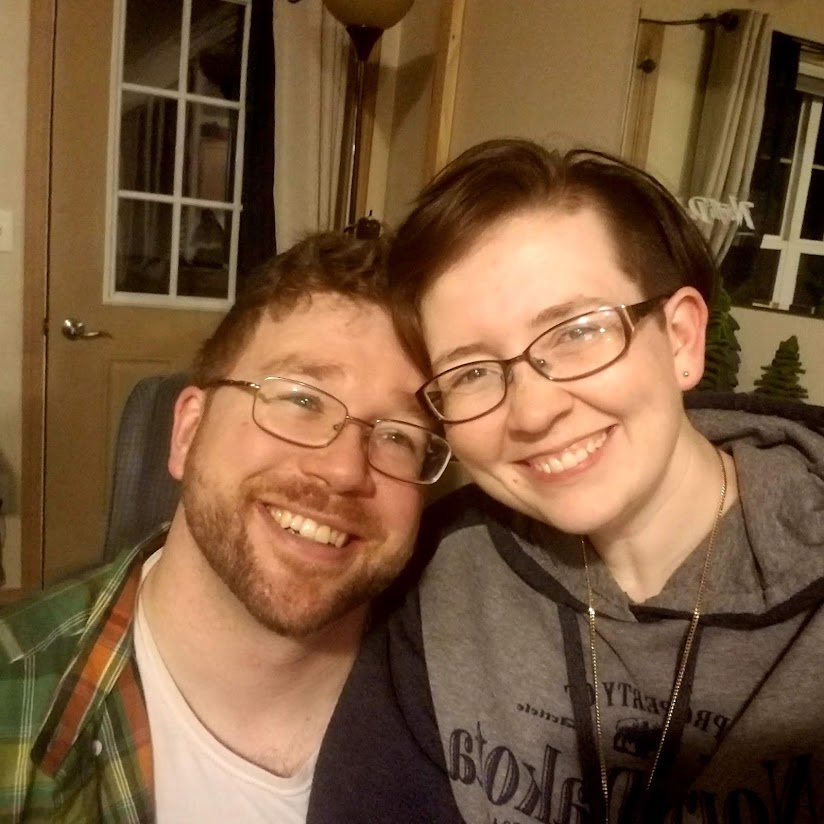 And then I was home! It was great to be back with Charles again–but my trip was definitely too short. In great news, I’ll be back in Lake Geneva next August for the release of Mailboat V! I can’t wait to see you then.