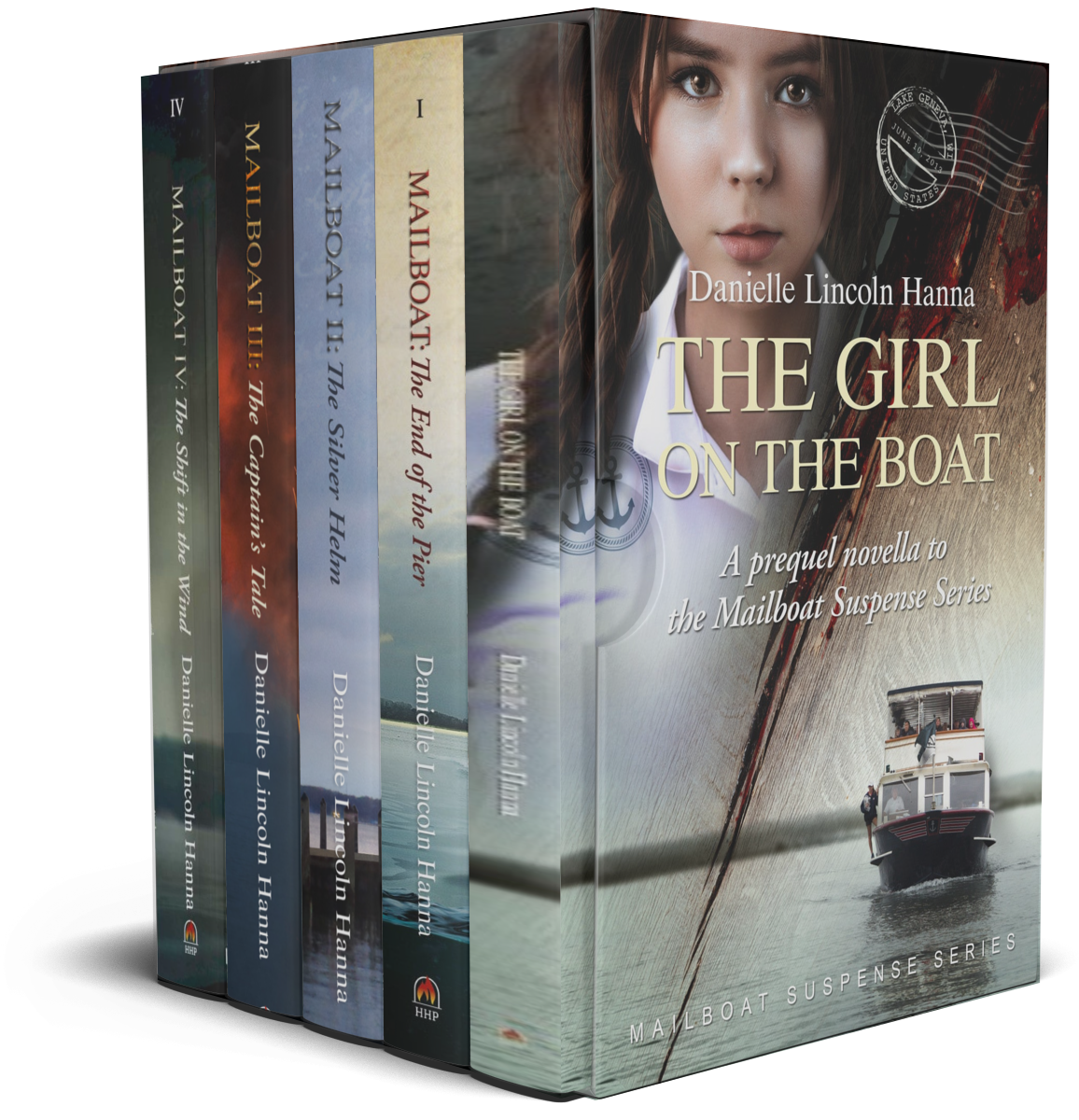 Planning to meet Danielle in-person during the 2022 Lake Geneva Book Signing Tour? You can pre-purchase to reserve your copy!

The seas be rough lately, and rations are scarce. The captain is loading the cargo hold carefully. Pre-paying to pick up in-person is the best way to ensure your copy! At checkout, choose “In-Person Pickup,” then note which event you plan to attend in the “Order Notes” section.

This option is UNAVAILABLE for the Cornerstone Shop and Dust Bunny Books events. While we plan on having plenty of copies on hand for these locations, you can inquire with the individual stores for pre-order options.

The Girl on the Boat

Her biggest dream was to become a mail jumper, not the key witness to a crime…

All Bailey wants is to join the elite crew of mail jumpers, fleet-footed kids who must leap from boat to pier to deliver the mail around a Wisconsin lake. She’s never done anything so daring in her life, but the hazards of wind and wave would be worth it to work alongside Captain Tommy. If she’d ever had a grandfather—or a family at all—she would have wanted him to be like Tommy.

But all her charts to success may end up in the drink when she catches a veteran mail jumper red-handed with a key to the police station. Only the night before, someone broke in and attacked a dispatcher. Is it possible that Baron, the most popular boy in town… is the villain?

Meanwhile, Police Detective Monica Steele learns that the case carries ties to a murder thought solved long ago, a suspect who’s been behind bars almost twenty years, and a cop she always knew was crooked to the bone.

Can they dredge up the truth before Baron catches on? Or will Bailey’s dreams for a perfect summer be dashed against the shore?

The Girl on the Boat is a prequel novella to the thrilling Mailboat Suspense Series. If you like hurricane-force plot twists, complex characters you can’t help but love, and a real-life setting that comes to life on the page, then you’ll love Danielle Lincoln Hanna’s enthralling tale!

Mailboat I: The End of the Pier

Abandoned by her own parents, forgotten by the foster care system, Bailey’s learned to weather every storm—except the one that rages inside. Is a family of her own too much to ask for? Her only anchor is Tommy, captain of the famous Lake Geneva Mailboat for the past fifty years, as reliable as the mail itself.

The End of the Pier is the first book in the thrilling Mailboat Suspense Series. If you like twists that leave you breathless, complex characters you can’t help but love, and a real-life setting that comes to life on the page, then you’ll love Danielle Lincoln Hanna’s enthralling tale!

A forgotten teen. A death too close to home. A killer still on the loose.

The story continues from Mailboat Book I

Life has taught Bailey that everyone she gets close to leaves her. Even her beloved mentor, Mailboat Captain Tommy, has pulled away after the death of his son. Yet after her own recent brush with death, she’s surrounded by people she wishes she could escape, from the flirty new busboy and the cops with their questions to the still-at-large serial killer with an ax to grind…

The Silver Helm is the second book in the riveting Mailboat Suspense Series. If you fell in love with Bailey and the entire crew from the first book, you won’t want to miss what happens next in Danielle Lincoln Hanna’s suspenseful page-turner!

Mailboat IV: The Shift in the Wind

A girl left adrift. A widow hunting for truth. A change in the air…
The story continues from Mailboat I, II, and III